Patient An 83-year-old male presented with an injury resulting from a fall in his home. He fell and was unable to adjust his position for several hours until he was found and sent to the Emergency Department. The patient’s medical history was significant for hypertension, hyperlipidemia, atrial fibrillation, dementia, and benign prostatic hypertrophy. After a generalized work-up, the patient was found to have mild dehydration but no other acute medical issues except gait disturbance. After 12 hours and gentle intravenous rehydration, he was transferred to a skilled nursing facility for short-term rehabilitation. There, an apparent hematoma was noted on the right lower leg. This injury progressed to black eschar (Figure 1) over a four-day period. A wound consultation was requested by the attending physician.

Diagnosis Initial evaluation revealed no acute distress or inguinal lymphadenopathy. There were no palpable peripheral pulses, but biphasic Doppler waveforms and an ankle-brachial index of 0.81 on the effected leg. Edema was moderate. There was a large, unstageable pressure ulcer at the anterior mid-tibia with edge separation and liquefying non-viable tissue in need of debridement. There was no odor to the wound, nor indications of cellulitis. Superficial satellite coagulums were also noted superiorly.

Course of Treatment Sharp debridement occurred at the bedside. Post-debridement measurements 9.0 x 8.5 x 1.5 cm3. The wound was copiously irrigated and 3M™ Kerracel™ Gelling Fiber Dressing was placed into the wound covered by 3M™ Kerrafoam™ Simple Border Dressing. A tubular elastic bandage was placed on the leg to provide mild compression.

Upon re-evaluation one week later (Figure 2), the patient was found to have increased edema, erythema, and warmth to the leg. The wound, although measuring 9.0 x 6.7 x 1.5 cm3, had purulent drainage in large amounts. There was minimal undermining noted at 11 o’clock. 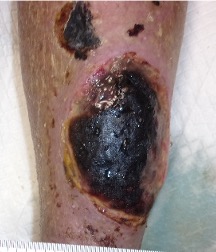 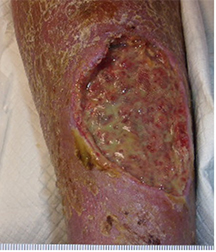 Over the next 14 days, the wound and surrounding erythema improved. Wound management transitioned to 3M™ V.A.C.® Therapy on Day 21 (Figure 3). Wound measurements were 8.5 x 4.6 x 1.0 cm3 with a small area of undermining of 0.8 cm superiorly. Negative pressure settings were initiated at -125 mmHg continuously, then changed to an intermittent setting (cycles of 5 minutes of negative pressure followed by 2 minutes off) on Day 4 of therapy.

Over the course of two weeks, the wound improved dramatically, achieving the goals of exudate control, promotion of granulation tissue, reduction of wound size, and wound edge contraction. Intensive periwound hygiene was performed at each dressing change. V.A.C.® Therapy was discontinued on Day 35 (Figure 4) with wound measurements of 7.5 x 3.0 x 0.1 cm3 and a demonstrable healthy granulating wound bed. 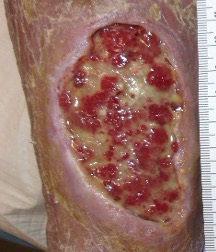 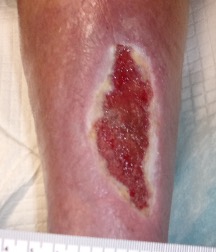 The goal of therapy continued to be local antimicrobial management without the use of antibiotics. 3M™ Promogran Prisma™ Matrix was applied to the wound, and 3M™ Touchless Care™ Zinc Oxide Protectant Spray was used to protect the periwound area. Kerrafoam Simple Border Dressing was reapplied as secondary dressing. Mild lower extremity edema was again controlled with an elastic tubular bandage. On Day 91, the wound measurements were 3.8 x 0.8 cm2 (Figure 5). On Day 119, the wound was epithelialized (Figure 6), and the patient was no longer receiving wound management services.

Do you have questions regarding this case study? Connect with a 3M Account Representative to learn more. Patient data and photos courtesy of Catherine Milne MSN, APRN, ANP/ACNS-BC, CWOCN-AP. As with any case study, the results and outcomes should not be interpreted as a guarantee or warranty of similar results. Individual results may vary depending on the patient’s circumstances and condition. NOTE: Specific indications, contraindications, warnings, precautions and safety information exist for these products and therapies. Please consult a clinician and production instructions for use prior to application. Rx only. © 2021 3M. All rights reserved. 3M and the other marks shown are marks and/or registered marks. Unauthorized use prohibited. PRA-PM-US-02984 (04/21).